Vector Autorregresive (VAR) models are very popular in economics because they can model a system of economic variables and relations. Bayesian VARs are receiving a lot of attention due to their ability to deal with larger systems and the smart use of priors. For example, in this old post I showed an example of large Bayesian VARs to forecast covariance matrices. In this post I will show how to use the same model to obtain impulse response coefficients and perform structural analysis. The type of estimation was based on Bańbura et al. (2010) and the empirical application is from Barboza and Vasconcelos (2019). The objective is to measure the effects of the Brazilian Development Bank on investment. Therefore, we will measure how the investment respond to an increase in loans over the time.

A structural VAR is described by the following equation:

are squared matrices of coefficients,

is a vector of constants,

is a vector of errors and

is the vector with all variables in the system. In this sense,

is not a single value like in an univariate Autorregressive model, it contains several variables that are used at the same time in the model. For example,

could have the GDP, investment and interest rate. In this case each matrix

. When we do structural analysis we want to know how some variable respond over time to a shock on some other variable. However, shocks in the reduced form are correlated between equations and can not be isolated. Therefore, an important difference between the reduced form and the structural form is that in the second the error covariance matrix is diagonal, which means uncorrelated shocks.

First we must install the lbvar package from my github:

The dataset is included in the package and it is called BNDESdata. I removed column 17 in this example because it contains a variable (capital goods prices) used only for robustness in other examples in the paper. The data is already treated and ready for the model. We are going to evaluate the effects of the Brazilian Development Bank Loans (BL) on the Gross Fixed Capital formation (GFCF), the GFCF fraction of machinery and equipment (GFCFme) and the GFCF fraction of machinery and equipment manufactured in Brazil (GFCFmeBR).

There is another parameter we must define called

is the one that makes the big model more similar to the small model in terms of squared error. Note that the small model does not use all variables, therefore we compare only the equations included in both models.

The codes for the Phillips-Perron test and the

are presented below. I used a small range for the

to save computational time given that I already knew that the best value was in this interval.

The VAR we want to estimate has 17 variables and 13 lags. This accounts for 3774 parameters in the reduced form if we include the intercept. The name Large Bayesian VARs is very much appropriate. The code below estimates the model, computes the recursive identification (see the full article for more details) and the impulse responses. The last step requires some simulation and it may take a few minutes to run.

Now we can plot the impulse responses and see the results. The figures below show the effects of a shock in the bank loans on the three variations of GFCF. 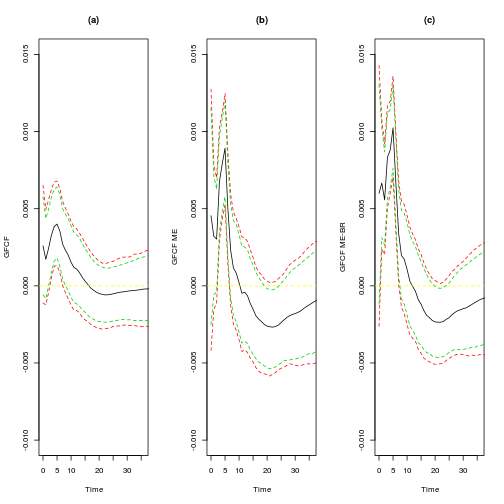 The effects of the bank are bigger if we move to the machinery and equipment measures because they represent a large portion of the bank’s portfolio. The responses are significant in some horizons. The shock was of one standard deviation, which accounts for a 20% increase in loans. This shock increases the GFCF by less than 2% if we look at the sum of the first 6 months. However, to understand the magnitude of this effect we must look at the fraction of the Brazilian Development Bank on total investment. Our results show that an increase of 1 BRL in loans accounts for an increase of approximately 0.46 BRL in the total GFCF. This may look like a small value first sight. We explain this results with two hypothesis. First, there is some degree of fund substitution where companies use the government bank just because interest rates are lower but they do not suffer from significant credit constraints. Second, There is a crowding-out effect because the government tends to increase the interest rate when the bank puts more money in the economy.

Finally, a good way to evaluate a VAR model in a macroeconomic framework such as this one is to look at how the variables behave in response to the monetary policy. The figures below show how the GFCF behaves when the government increases interest rates (IR). 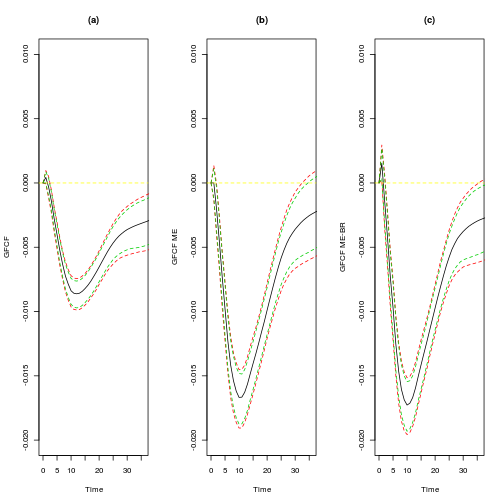